The Waitakere Ranges and West Auckland have been a nurturing ground for the New Zealand arts, especially since the 1950s.
New Zealand painting, writing and ceramics found a demi-paradise on the edge of the city.

Anyone who has visited the Waitakere Ranges will have experienced the power of this landscape to inspire. Here are spectacular west coast beaches on the Tasman Sea, deep river gorges and high stone bluffs, and wonderful walking tracks through this remnant of coastal forest. It is a place where people come to rejuvenate their spirits, and rejoice in the rare beauty of a wild and natural environment. 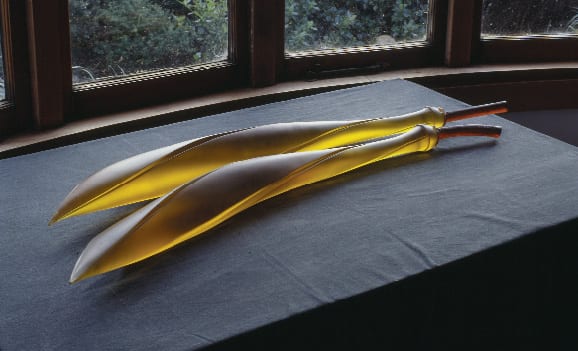 The foundation of the Waitakere Ranges Protection Society in 1973 coincided with the rapid expansion worldwide of environmental consciousness that in New Zealand was stimulated by such events as the Save Manapouri campaign of the late 1960s and early 1970s. Artists and writers were among the most active supporters of such causes. The Waitakere Ranges, whose kauri forests had been denuded by decades of milling from the 1860s, were a natural focus of conservationist initiatives, though it was the siting of a council tip at Te Henga which was the immediate stimulus for the formation of the society.

Ancient fish hook kits and woven mats have been found at Karekare. An old panel mat, finely plaited in vertical and horizontal twill. Strips of flax have been threaded through these making loops. To these a second set of flax strips have been attached by knotting to hold the fish hooks in place. 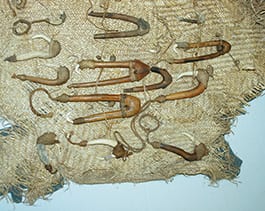 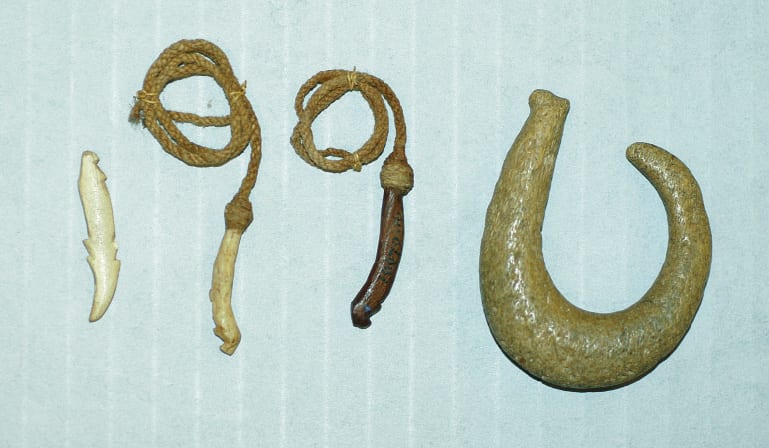 History of European painting in the Ranges 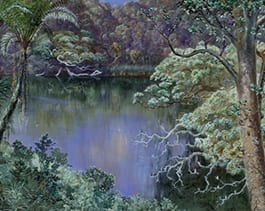 Kennett Watkins, The Home of the cormorants Waitakere Ranges, 1886; gouache. Auckland Art Gallery Toi o Tamaki; gift of the students of the artist 1888

Long before the environs of the Waitakeres were sophisticatedly packaged for the consumption of a metropolitan and international audience the region had cast its spell over local artists who chose to live among or frequent the ranges. In the 19th century, while the Waitakeres and the west coast beaches never quite became such iconic subjects for landscape painters as the Bay of Islands, the Pink and White Terraces, Mt Taranaki, Otira Gorge, the southern lakes and mountains, or Mitre Peak in Fiordland, they nevertheless attracted a steady stream of artists on the hunt for subjects suitably attuned to the Romantic taste for the sublime.

Alfred Sharpe was one of the first to protest against the indiscriminate felling of the kauri in the Waitakeres for milling. He wrote in 1886: Now that the excursion season is on again, regret will be universally expressed at the short-sighted greed of landed proprietors on the Waitakerei [sic], who have exterminated almost every accessible kauri tree of any value as a show tree … Could not Government be induced to reserve a few hundred acres of the best of it, so that future generations may arise and call us blessed … The kauri will be utterly extinct in twenty years more, unless some of it is reserved for posterity. 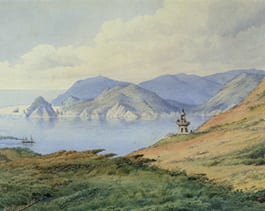 Nigel Brown in the Waitakeres

Nigel Brown is a prominent member of the group of New Zealand neo-expressionists who came to notice in the early 1970s. Many other examples could be cited of Brown’s use of his environment in the works that he actually painted in the Ranges. Long after he had moved into the city the Ranges were still there, in the mental as well as the physical background.

From ‘Nigel Brown in the Waitakeres’; Warwick Brown Waitakere Ranges 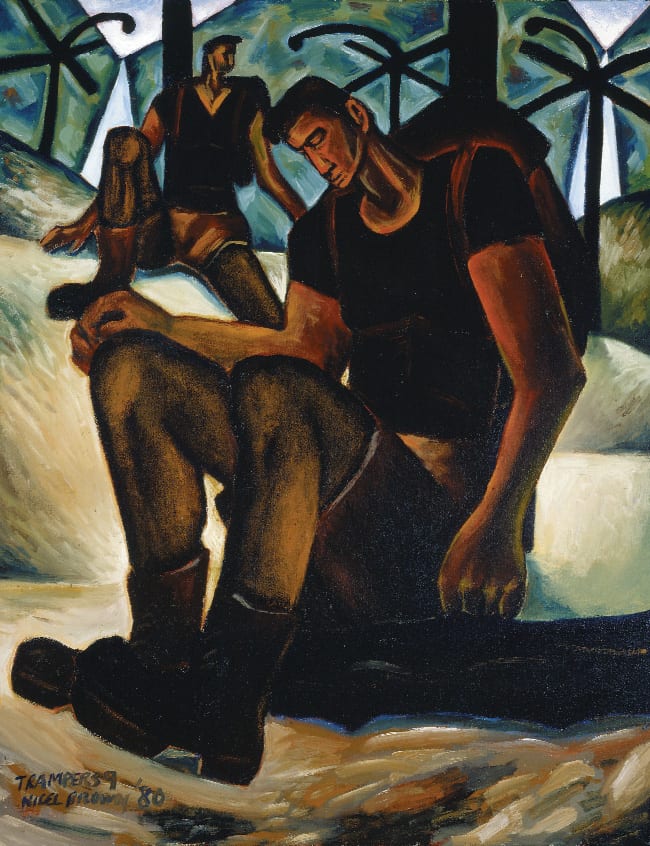 Examples of the work of major 20th century artists

The Waitakere Ranges, the subject of many an unadventurous landscape artist’s brush, acquired new perspectives as a result of McCahon’s sojourn there. The various Titirangi works can now be seen as attempts by McCahon to apply the uncompromising techniques of cubism to land and skyscapes, turning the theory back to its roots in Cézanne’s landscapes. One can now see McCahon developed many ideas in the Waitakeres which he used to great effect in later paintings.

“ I am painting about the view from the top of the cliff. This is at Muriwai … I am not painting protest pictures, I am painting about what is still there and what I can still see before the sky turns black with soot and the sea becomes a slowly heaving rubbish tip. I am painting what we have got now and will never get again.” 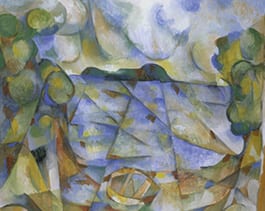 Binney identified particularly with the environs of the Waitakeres and the west coast beaches and his attention was focused on environmentally damaging activities of the area which he depicted memorably in many paintings and drawings in the 1960s and 1970s. Binney became a foundation member of the Society. 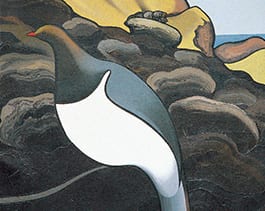 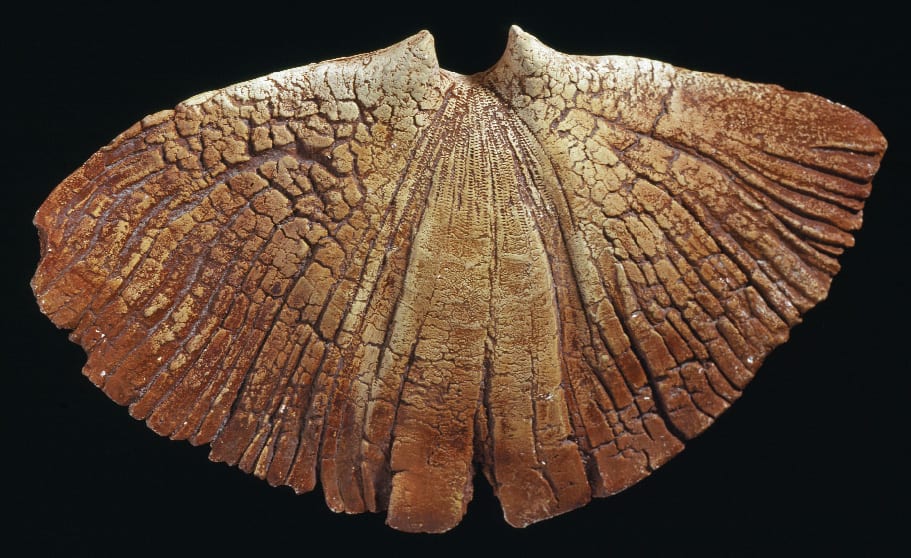 Len Castle is acknowledged as one of the pioneers of the Crafts Movement in New Zealand and he made the Waitakeres his home for many years. Len describes the Waitakere Ranges as one of his spiritual homes. ‘People were tucked away in the bush. You needed to shake the trees to reveal who was there,’ he says, recalling fellow potters Don Thornley, Helen Mason, Jeff Scholes, Andrew Van Der Putten, John Parker, Rosemarie and Roger Brittain, and Doris Dutch. The names come quickly — sculptor Bob Field, painter Gretchen Albrecht, photographer Eric Lee-Johnson at Piha, designer (some time for Crown Lynn) Frank Carpay, advertising man Bob Harvey, teachers, journalists, academics. Although the bush was not a direct influence on his work, the impact of living in the Waitakeres was considerable. Len was inspired by the low-keyed colours of the bush, the rich range of textures of the shore, the sun-weathered and sea-lashed volcanic rocks and the patterns and rugosities of the tree trunks. 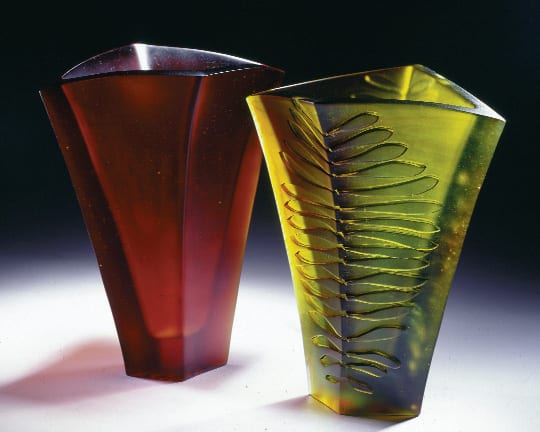 In 1989 Ann Robinson and John Edgar moved to Karekare. John’s early work was in the form of jewellery and small sculptures. He had visited the Ranges since childhood and Karekare had always been the family’s favourite beach, but it was after he had lived there for some time that he realised how the powerful landscape and sinuous horizons of the Ranges had seeped into his subconscious. His works started to take on the grandeur and scale evoked by his surroundings — substantial stone and marble sculptures that reflected the relationship between sky, sea and land that was so pervasive and omnipresent.

The move to Karekare in 1989 corresponded with Ann’s career shift from blowing glass to casting it. The new direction in her work was risky and required a lot of experimentation. Her contribution to the artform and her international reputation were acknowledged when she was made an Officer of the New Zealand Order of Merit in the 2001 Queen’s Birthday honours and received the Designers Institute of New Zealand’s John Britten Award for design innovation in 2002.

Ann responds very directly to the elements in her environment and her work developed in size and intention when she moved to Karekare. She recognises the weight, form and energy of the place in her work and loves capturing the sense of sunlight filtering through the nikau in the bush. Her medium is sympathetic to the sensibilities aroused by the environment — the density and darkness of the bush until sunlight strikes through it, and the sense of drama. Even the ripples in the sand when the tide is out is evoked on the surfaces of some pieces by controlling the temperature of the wax being poured into moulds. 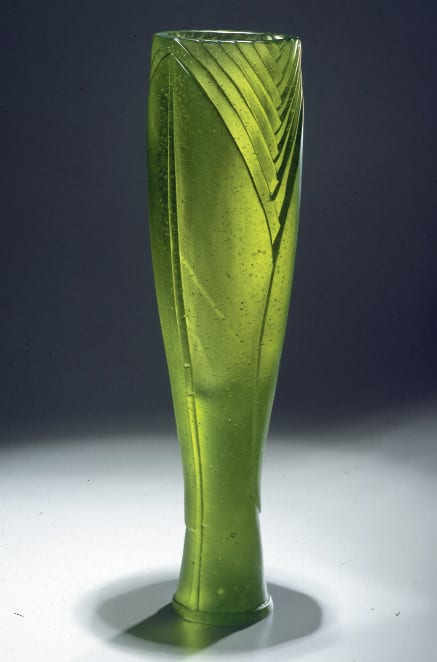