Geology of the Waitakere Ranges

The Waitakere Ranges’ origins date back to the early Miocene period, between 22 and 15 million years ago. At that time the whole Auckland region was under the sea.

From Bruce W Hayward, ‘The Structure of the Land’ Waitakere Ranges

The layered sandstone and mudstone (Waitemata Sandstones) that now forms the cliffs around most of the Waitemata Harbour accumulated at this time as sand and mud on the floor of a deep sea depression, called the Waitemata Basin. 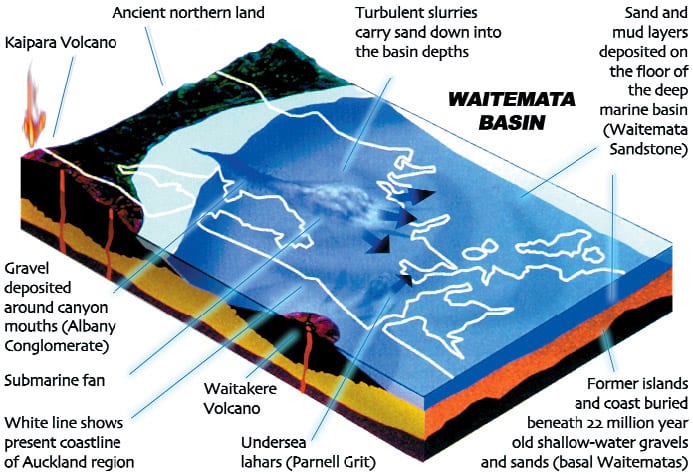 The Waitemata Basin was bordered to the west by an actively growing undersea volcano, that we now call the ancient Waitakere volcano (Fig. 1). It was active for six to seven million years and built a volcano, 50km in diameter and 3000–4000m high on the floor of the sea. It was centred 20km west of the present-day Waitakere Ranges, and actively grew with periodic eruptions of lava, pumice and ash spewing onto the ocean floor.

The ancient Waitakere volcano was similar in nature to or modern volcanoes of Ruapehu, Ngauruhoe and Tongariro, except that it grew to five and six times the size of these three volcanoes combined, and was in the middle of the ocean.

The modern Waitakere Ranges are the uplifted and greatly eroded remnants of just the eastern slopes of the huge Waitakere Volcano. About 16 million years ago, as volcanic activity was drawing to a close, the Waitakere volcano was pushed up out of the sea by enormous forces deep in the earth. Following the cessation of volcanic activity about 15 million years ago, there were further earth movements with parts of the volcano being pushed higher and other parts subsiding. A long sustained period of erosion by the Tasman Sea had removed all parts of the volcano that were above sea level by about five million years ago, creating an extensive coastal and subtidal plain. Soon after this, further major earth movements pushed up the present-day Ranges and tilted them gently towards the northwest. If you view the Waitakeres from a distance you can still clearly see the remains of the gently tilted plain which now forms its summit ridges. 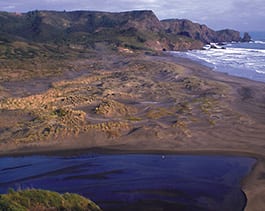 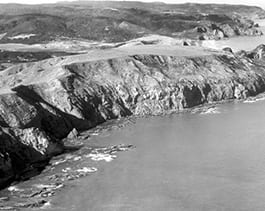