History of the Waitakere Ranges

New Zealand is a land that until very recently was rich in forests that supported a unique biodiversity: a land of great trees and great birds. Until a thousand years ago no humans had stepped ashore on these islands so far removed from other landmasses in the South Pacific Ocean. Migrations from the Pacific, and later from Europe, brought inhabitants, and with them came the first exotic plants and animals, and the axe and fire of agriculture. Progressively larger areas were cleared, until now in the 21st century more than 90 percent of the forest cover has been removed from the North Island.

It is hoped that a greater understanding of the links between history, the natural world and conservation values will enhance interest in the Ranges and impart a love for this unique environment.

The tangata whenua of the Waitakere region were the Nga Oho, who were later known as the Te Kawerau. The Ngati Awa chief Maki from the Taranaki defeated them but, as a result of intermarriage between victors and vanquished, the tribe became known as Te Kawerau a Maki, which although decimated by the Ngati Whatua in the 17th century, remain as a separate entity to this day.

Because there were few Maori along the northern coast of the Manukau Harbour at the time the first Europeans arrived it was originally thought that pre-European Maori had only minor settlements there. However, this assumption was dispelled by Diamond and Hayward when they completed their prehistoric site analysis in 1978. (Hayward, BW, Diamond JT 1978: Prehistoric Archeological Sites of the Waitakere Ranges Auckland Regional Authority: 19-70pp) 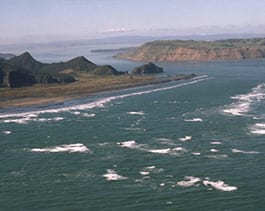 In the 1700s, motivated by what they saw as past injustices, Ngati Whatua moved into the areas occupied by Te Kawerau. This was followed in the 1820s (Stone, RCJ 2001: Tamaki Makau Rau to Auckland, Auckland University Press, chapter 4) by major raids by Ngapuhi armed with muskets. As a result, many Maori, including Te Kawerau, Waiohua and Ngati Whatua, were exiled to the Waikato. It was not until 1836 that peace enabled Maori to begin to return. John White (the government agent in 1850) reported that Te Kawerau had assumed control of the west coast of the Waitakeres, and Ngati Whatua the southern foothills and the Tamaki isthmus as well as along the Manukau coast to Whatipu.(Coney, S, 1997  Piha: A history in Images. Keyhole Press)

In 1853, when the crown renegotiated the previous land deals with Maori (including the Cornwallis transaction), the deed of sale indicates that the vendors were Ngati Whatua, Akitai (of Waikato) and Ngati Te Ata. Known as the ‘Hikurangi purchase’ this deed covers most of the land along the Manukau coast. (Aleman, Maurice: Earliest Land Transactions in West Auckland, Library of West Auckland) 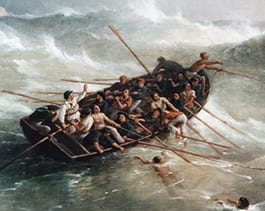 Details of the painting Richard Brydges Beechey, The Wreck of the HMS Orpheus. Oil on canvas. New Zealand Maritime Museum.

The Manukau Harbour traffic in ships built up steadily during this period, particularly prior to the New Zealand Land Wars of the 1860s. In February 1863 HMS Orpheus was sent to New Zealand from Australia under British naval direction to check on two British naval ships in New Zealand waters and the impending land war. Commodore W.F. Burnett, who was in charge of the Australasian Naval Station, instructed the Orpheus to sail into the Manukau Harbour without due reference to the latest sailing directions (gazetted August 1861). He ignored the advice of his sailing master who had previous experience of the Manukau.  The sand bank(s) outside the entrance had been shifting slowly northwards and the Orpheus struck. The ship was completely destroyed with the loss of 187 officers and men, still New Zealand’s worst maritime disaster. Captain Wing was initially blamed by the Admiralty and it took almost a lifetime to exonerate him, but the Provincial Government was loyal and he continued as the Manukau harbour master until his death in 1888. 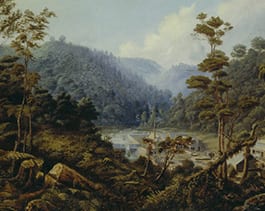 At dawn on a day in March 2003, a great gathering stood in the Karekare carpark on a patch of gravel and kikuyu grass. Hunched against the morning chill, Maori and Pakeha gathered with the children of the Lone Kauri School to await the elders of Te Kawerau a Maki for the unveiling of a pou whenua. This carved sentinel of the beach, hewn from a single block of totara by master carver Sunnah Thompson, stood with its face turned to the rising sun, on a plinth of coastal rock taken from the northern cliffs of the Waitakere Ranges.

For just a moment, the world revolved around this upright wooden sculpture and this people. It signified the return of Te Kawerau a Maki to Karekare. On this same spot began the rahui (warning sign that a rāhui or a ban is in place) of 13 June 1993 which stood against the wholesale plunder of shellfish. Then, the young held tall bamboo staffs with white flags of peace and healing. Right here, as at that earlier gathering, the restoration of mana was being acknowledged.

The pou whenua kohatu te uru is named after a Te Kawerau a Maki chief skilled in building fortified pa. One of his largest pa sites was on Te Kaka Whakaara (now known as The Watchman), a stronghold of the local iwi for more than 400 years. It would have seen a community of up to 500 people living in the Karekare valley, in the coastal coves and headlands.

Within sight of this little carpark one can see the great cave Wharengarahi. This was formed as a palisaded fortress for the Te Kawerau a Maki people in the times of marauding tribal raids. Fortified below, it would have worked as a redoubt for the aged and very young. The destruction of the pa and the cave meant a long period of mourning and grief that has only recently started to heal.

The source of this grief began with the arrival at Karekare of the northern Nga Puhi in the musket wars in 1825. The pa was destroyed, the inhabitants slaughtered. Many were driven in the final hours of the battle to leap from the top of The Watchman rather than be enslaved. For nearly two centuries Te Kawerau a Maki had mourned this place, visiting only to acknowledge its past.

It has been estimated that in the years before 1840 speculators snapped up more acres than New Zealand possessed. When the Treaty of Waitangi was signed, the Crown reserved the pre-emptive right to buy land from the Maori owners. All previous purchases were examined to determine their validity. In the western Ranges the only claim investigated was that of the Manukau and Waitemata Land Company.

In 1875, Waitakere was described as: ‘much broken and sparsely settled but in various sections clearings have been made and homesteads formed.’

During the ‘long depression’ of the 1880s and early 1890s families moved into the area to live off the land. This was the era of the gum diggers and squatters who lived in whares .When the depression ended, many left for jobs in town.

In the early 1900s most of the farms in the centre of the Ranges were purchased by the Auckland City Council for water supply and the bush grew back. In other parts of the Ranges, neglected paddocks quickly reverted to scrub when manpower was unavailable. Most of this land is now in the Auckland Regional Council Parkland.
From ‘West of the Crest’ Jan Barnes Waitakere Ranges