The fight for permanent legal protection of the Ranges

“The submissions were so well researched, so passionate and engaging, just accentuating how much of a ‘jewel in the crown’ the Waitakere Ranges are”
Lynne Pillay Oral History 2012 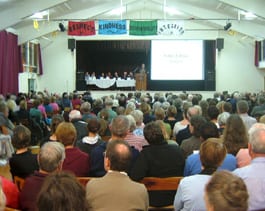 The majestic Waitakere Ranges area comprises coastal rainforest, wetlands, dune systems and large tracts of primary and regenerating lowland. There is particular concern about the cumulative impact of development and recreational use on the area. However, the foothills and coastal villages outside the area are also subject to the effects of development and urban intensification. These pressures are compounded by the ranges’ proximity to metropolitan Auckland, and they threaten to undermine the ranges’ unique natural heritage and biodiversity values.

Over many years, various attempts were made to get legislative protection for the Waitakere Ranges. This fight went on for at least thirty years, with various proposals of different paths towards the goal.

The first attempt was local MP Jonathan Hunt’s Private Member’s Bill in the 1970s that got its first reading but was blocked by the local bodies. Gary Taylor put forward other ideas in 1980s and a proposal for a Waitakere Ranges Authority in the 1990s. With the amalgamation of local authorities to form the new Waitakere City, new hope was born with pro-conservation councillors Peter Maddison, Kevin Lynch and Dorothy Wilson. However, the tendency for the composition of the Council to swing between pro and anti conservation attitudes persisted.

More fruitful was the formation at the same time of the Auckland Regional Council (ARC), which was to gather the regional parks including the Centennial Memorial Park in the Waitakere Ranges under the wing of the Regional Parks network. The new Waitakere City Council (WCC), however, still controlled the foothills and the coastal villages, and it was apparent that areas outside the park were the source of many ecological problems that affected the protected parklands.

However, the drive towards environmental education that WRPS had always supported gradually led to a “greening” of the local council candidates.

In the late 1980s the Maruia Society proposed that “National Heritage Areas” be designated and the Waitakere Ranges, along with other notable forest and coastal landscapes such as the Coromandel Peninsula were suggested as candidates.

This was a time of considerable law reform with a new Conservation Law and the Resource Management Act (RMA) which was supposed to reorient all development laws in a more conservation friendly way.

WRPS invited Guy Salmon, the director of the Maruia Society, to a meeting to explain this idea.

Despite the improvements brought about by the RMA in some areas, it was not sufficient to prevent undesirable developments being proposed constantly in the Ranges. Each one of these had to be fought individually and needed a lot of effort and money to oppose.

Some 15 years after the formation of Waitakere City Council and the Auckland Regional Council, with a sympathetic central government in Wellington, sympathetic local MPs, and conservation minded elected members on both the WCC and the ARC, the time was ripe and the Waitakere Ranges Heritage Area Bill was proposed.

In 2003, local elections brought in sympathetic members on both the WCC and the ARC who were prepared to discuss such a bill.

In addition support was obtained from several local MPs, and they carried these wishes to Parliament in Wellington.

At last the Society saw that passing such a Bill might be possible.

Discussions began in 2003 with WCC, Rodney District Council (RDC) and ARC holding a series of workshops with the approval of iwi to canvass public opinion.

Presentations at the 2004 AGM were positive and public opinion seemed to be in favour. In August 2004, John Edgar reported that never had the Society been this close to achieving its goal, but obstacles remained. Drafting a local body bill was a lengthy process but it was undertaken by the WCC, ARC and RDC, with inputs from the Environmental Defence Society (EDS) and reinforced by polls that indicated support from 81% of the city’s inhabitants.

In the 1990’s Waitakere City had adopted the concept of the Eco-city put forward by Mayor Bob Harvey after attendance at the world environment conference held in Rio de Janeiro in 1992. Always a lover of the wild Waitakere coast, the Mayor’s initiative did a great deal to educate the public on environment and landscape protection and at this time Waitakere was regarded as a leader in this area in New Zealand.

The consultation meetings that were held by the WCC, ARC, RDC and ratepayer groups were often stormy, with some landowners objecting that the proposed legislation would prevent them subdividing land and selling at a profit to the expanding city. As far as WRPS was concerned this was exactly the outcome it favoured, as the Society wanted to retain the rural buffer zone between the urban area and the forest in the parkland. Landowners who had bought land in anticipation of rules against subdivision in the area being relaxed as the city expanded were furious to have their plans frustrated. An organisation called the Structure Plan Advocates Network was set up by landowners promoting subdivision and opposing the bill.

The planners at Waitakere City and Auckland Regional Council were led in drafting the bill by Graeme Campbell. After many discussions about the boundaries and against initial reluctance, Rodney District Council was eventually included as a supporting local body, as the boundary proposed for the Heritage Area included land within its jurisdiction. Criticism of the draft was made, not only by landowners but also by some lawyers, that the draft was open to various interpretations and the bill would not achieve its objective. However, in order to get the draft bill approved by the local bodies, it was necessary to make some compromises and WRPS hoped that the Bill would eventually be enacted and resolved that the Society would monitor its implementation carefully.

Political support was essential and the work done by local MPs David Cunliffe, Chris Carter and Lynne Pillay, in persuading their colleagues in Parliament to support the Bill was very important. The Labour government at this time had the support of the Green Party on this issue, but did not have a complete majority in Parliament and the support of some independents was needed to pass the Bill. The opposition parties would not support the Bill, and put forward several opposing ideas during the election of 2005.

The Waitakere Ranges Heritage Area Bill was presented to Parliament and obtained its first reading in 2006 and became law on 8 April 2008. The Act passed by only one vote after hard work by Lynne Pillay to gather support from two independent MPs. The Waitakere Ranges Protection Society felt that this was a landmark in its 35 year campaign for legislative protection.

The success of the Act in preventing the spread of urban development into the Ranges areas adjacent to the Park, is still under review, but there has been a significant drop in non-complying consent applications since its passing. The Society’s legal counsel, Douglas Allan considers that this is mainly due to the Act. The amalgamation of local authorities in 2010 resulted in some confusion and lack of clarity about the details of responsibility in the combined district plans of the new Auckland Council. The Waitakere Ranges Heritage Area Act occupies a position analogous to a National Policy Statement under the RMA.

Arnold Turner (formerly a Judge of the Land Court) recalled that when the first draft of the Bill came out he spoke quite strongly against it but after he had put in submissions and seen changes in the final wording, such that the Act became a factor under the RMA he is quite relaxed about it. ” I think it gives adequate recognition of the significance of the Ranges” (Arnold Turner, Oral history 2012).

It is to be hoped that as the new administration consolidates, adherence to the principles of the Act in its strategies will become clearer. However, it will not be a ‘silver bullet’ and will require monitoring in detail.

The Waitākere Ranges Heritage Area Act was established in 2008 to protect and enhance the area’s heritage features for present and future generations.

This report, commissioned by Waitākere Ranges Local Board, reviews whether the objectives of the act are being met, and how human activity and council decisions are affecting the area.