Much has been written about the Waitakere Ranges over the years, but here is a selection of important publications that you might find interesting.
Some are now out of print, but many are still available in book shops and most can be borrowed from Auckland Libraries.
If you know of any books that should be added to the list please email us with your suggestions. 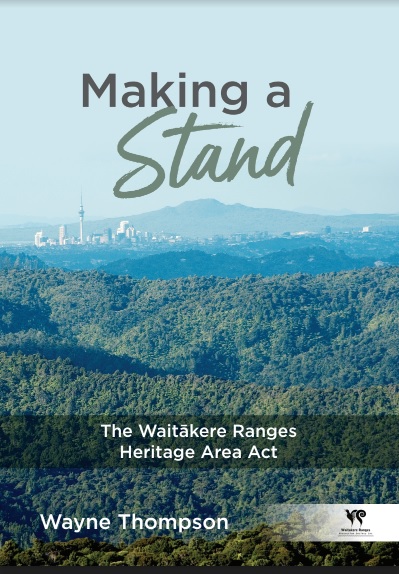 It is with great pleasure that we can finally announce the launch of our Ebook "Making a Stand, The Waitākere Ranges Heritage Act" by Wayne Thompson. The passing of the The Waitākere Ranges Heritage Act in 2008 represents a milestone in the life of the Society. Wayne Thompson documents the story behind the legislation coming into force. Read about the people, the politics and the passion!

The Waitākere Ranges Heritage Act which came into force in 2008 represented a milestone in the life of the Society.

conservation efforts in the Waitākere Ranges to the Act’s passing in 2008.

Grants for this work from The Trusts foundation, Foundation North and from the Waitakere Ranges Local Board are gratefully acknowledged, as is a generous donation from the Hanna family.

Also we acknowledge and thank Wayne Thomspon for his excellent book. Wayne was a senior environmental reporter for the New Zealand Herald at the time leading up to and after the passing of the Act. For 53 years, Wayne Thompson was engaged in a wide

variety of newspaper and magazine journalism. As a reporter for the New Zealand Herald he covered the citizen movement for permanent protection of the Ranges, his favourite place for recreation.

John Edgar, our former President had been instrumental in sourcing many of the images so many thanks to John, and Sandra Jones and Anna Fomison for their editorial assistance and to Carolyn Lagahatau and Peter Dowling from Oratia Media.

This Ebook is available free from our Website and will be distributed on Overdrive, Kobo, Apple Books and other platforms. 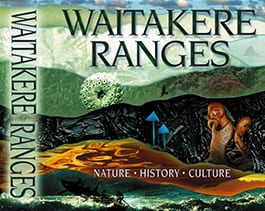 Edited by Bruce and Trixie Harvey

This book describes the ecology, geology, history and art of the area.

The story of the Waitakere Ranges is written by many authors who tell us from various points of view, what it is about the Ranges that they love and value.

The book contains essays on the natural history, asserting the fascination and intrinsic value of the wildlife and proposing ideas to enhance it.

Other essays tell the history, both the destruction and conservation of the great forest and the lives of the people who settled here.

Maori past is presented as a poetic essay about the place names in history and legend.

The Ranges environment has inspired some of New Zealand’s most celebrated poets writers and artists, so the book concludes with the reproduction of works of art, poetry and prose that are identified with the area.

You can purchase the book from the Society. 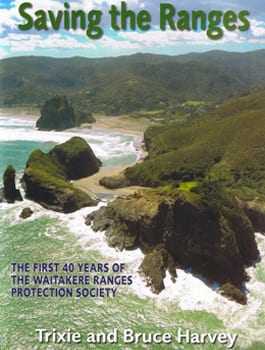 The first 40 years of the Waitakere Ranges Protection Society

Edited by Bruce and Trixie Harvey.

The book tells of the many people who have contributed to the conservation and protection of the Ranges and makes it clear that the work of the Society would not have flourished without the hundreds of members who have given their support.

The Society has been an environmental nursery for many people. Being associated with this inspirational group has been empowering.

Members have discovered that individually and collectively they can be effective, that they can make a difference in their communities and some have been encouraged to take up other causes.

And while the environmental movement in New Zealand was finding ways to be most effectual, local and regional Councils and the voting public were learning that protecting our environment really matters.

Although the Society has been very successful in its advocacy through protests and activism over the years, education, planning, litigation, conservation and community wellbeing have been equally important, and they remain a vital part of the Society’s work today.

You can purchase the book

Also online are press releases issued by the Society and the  annual reports issued at the Annual General Meetings.

There are also a number of interesting articles and speeches by members and dignitaries relevant to our work.

If you would like to read previous Annual reports please contact us and we will email them to you.